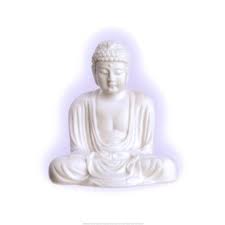 My answer to the question that titles this article is a resounding YES, but I raise the issue, not to bury Caesar or castigate Brutus -- though I WILL get a castigating swat or two in before this blogpost is through, judgmental pundit that I am -- but to raise the discussion.

Buddhism isn’t about only those of us that claim the designation of Buddhist, but about the circumstance of everyone. It’s not as if we were all Hawai’ians and our discussions were about the archipelago where we live, and things narrowly pertaining to we’uns, the surfing, hotel management and telling tourists about what it's like living close to a volcano.

I submit that Buddhism is about suffering. And, I submit that suffering is universal, endured by all humans except a scant few with a vaulting pole in their head or in a far-advanced stage of dementia. And that suffering is a circumstance that waylays cows and dogs and squirrels from time-to-time and a thousand other species of our fellow traveller animals on this big blue whirling planet. Doesn’t our concern reach out to all of them?

Just as massive air pollution that emanates from here in the US affects the world, suffering all over the world HAS TO affect us, involve us and concern us. And yet, American Buddhists’ interests in the world [at least, when we see ourselves in the narrow category of “American Buddhist” is focused on Tibet, Burma, Sri Lanka, Thailand and other nations that have significant Buddhist populations. Why is this?

Is the circumstance of a Buddhist suffering of a different order of misery that we should favor it at getting our keen attention, as opposed to the misery of non-Buddhists? Basically, are we all here just to look after the tribe? Is our spiritual maturity that ill-advanced? In other words: Are we all just yahoos (in the Swiftian, not online, sense) on this freakin wayward bus we call earth?

“Our” magazines and some of the buddhoblogs that discuss issues of worldwide significance talk about Buddhism, as well they should and must, but not in the context of suffering soldiers In Afghanistan near Pakistan. Why is that? JUST because there are no Buddhists to frame the story?

Sebastian Junger wrote this tremendous book, WAR, that ventures far afield to a place where intensity and fear and courage are most extreme. Isn’t Buddhism there, no matter that self-proclaimed Buddhists aren’t? Shouldn’t the farthest places be within our reach -- from the heights of heaven to the pits of hell?

Must we go to India or Nepal to find Buddhism? Don’t you think the fount of Buddhism is already close by, and if we don’t know that it is close by and everywhere [and not especially so in those "special" places], haven’t we lost it?
at 00:34 6 comments


Kids are freakin’ nuts these days!  Forgive me for being so blunt.  I’m sure that many of you have children that you love and adore, (or at least a couple of cute little cousins or something that you buy Christmas presents for) but come on, be honest; they’re a little crazy, right?
WHY ARE KIDS INSANE?
From the moment they’re born, we bombard them with external stimulation.  We start by blasting Mozart (or Jay-Z) into their little ears as they’re lying in their cribs.  As soon as they’ve developed enough muscle in their tiny torsos to sit up by themselves, we plop them down in front of the television and assault their brand new brains with mindless atrocities like the Teletubbies.  Not long after we get them hooked on T.V, we introduce them to their first real DRUG:  Sugar.  We fill their baby bottles up with soda and pump their little stomachs full of High Fructose Corn Syrup.
As soon as they develop enough dexterity in their cute little fingers, we hand them a video game controller to teach them how to kill zombies.  Some kids spend six hours a day using their thumbs to shoot at innocent civilians and gore their way through screen after screen of rebel, Nazi soldiers.   Before long, they’ve got their own cell phone, an iPod, a Facebook account, and they’re staying up until 2 AM to watch the latest Saw movie.
That’s not to mention all the medication we dole out to them in the name of good science.  Kids eat more Ritalin than they do fruit.
Sounds grim, right?
Ok, maybe I’m exaggerating a little bit… but not by much.  Check out this recent article (one among many) in the New York Times about how electronics are literally changing the physiology our brains:
“Attached to Technology and Paying a Price”
Here’s a quote from a woman interviewed in this article talking about how her husband’s addiction to his computer has affected him:
“It seems like he can no longer be fully in the moment.”
Sounds kinda like ANTI-MINDFULNESS, doesn’t it?

EDUCATION
I spend an average of twelve-hours-a-day with kids.  I teach middle school English.  Yep, Middle School.  You remember it, right?  Think back to that time when your (supposed) best friend went behind your back and told everyone about how you got your period while you were playing volleyball in gym class and then proceeded to launch a school-wide hate campaign against you, complete with pictures of your face decorated with giant Tampons sticking out from your ears and eye sockets…
Ringing any bells?
It’s gotten pretty bad out there.  In fact, the entire education system in our country is basically in shambles.  Teachers aren’t teaching, school boards are pissing away what little money they have on everything EXCEPT what’s best for the students and politicians are running around like chickens with their heads cut off trying to figure out a way to test kids to see if they’re actually learning anything.  I’ve got news for you… most of them aren’t.
For Christ’s sake, there are 12-year-olds committing suicide; hanging themselves in their closets, because they can’t handle the pressure of it all!
Middle school is crazy.  I don’t know if it’s hormones, or if it’s because they’re just bored as hell, but middle school is kind of like a mini-mental institution.
I’ve taught school in settings ranging from conservative Catholic to urban ‘hoods in New York City.  Plus, I have a twelve year old.  (I’m 30.  Do the math.)  So, I kind-of know what I’m talking about here.  Maybe you think I sound “jaded” or “burnt out”?  Nah… I’m just realistic (and I have a morbid sense of humor).
The really crazy thing is… I LOVE IT!  Middle school students offer the greatest challenge to teachers because of their unique position in life.  They’re “no longer children” but “not quite adult yet”.  Consequently, I believe they offer the greatest sense of fulfillment and reward to those of use willing to brave the trenches.
KIDS NEED (BUDDHA’S?) HELP
Over on my blog, “Buddhism Sucks”, I’m doing a series of posts on meditation.  Specifically, I’m trying to deconstruct the watered down, heavily commercialized cult of “American Buddhism” in an effort to extract the legitimate, practical instructions on meditation that so many of us desperately need in our lives.
American kids are suffering.
Yeah, I said it… S-U-F-F-E-R-I-N-G!  You know, DUKKHA; that overused, played out Buddhist tenet that pops up in every single time you even hear the word Buddhism.  It’s scrawled on every page in every single book and talked about by every single Buddhist “teacher” on the face of the earth.  Sometimes I think we’re so obsessed with the idea of suffering that we’re adding a whole new sadomasochistic dimension to Buddha’s teachings.  Not that suffering isn’t key; it is, but PLEASE STOP CRAMMING IT DOWN MY EVER-LOVIN’ THROAT!
Or at least give me a chance to swallow before you offer me another bite!
Plus if we’re so concerned with suffering, let’s open our eyes to the fact that there’s a whole world of underrepresented “sentient beings” out there who are feeling it too!  What’s worse for kids though, is that they’re totally unaware that they are suffering.  They’re too busy texting (or sexting) to notice!
Whoever’s CEO of the corporation called American Buddhism needs to sit down with his marketing team and switch focus groups from white, upper-middle class professionals and direct some attention to the kids wallowing in our educational system.
If there’s anyone out there who benefit from a down-to-earth approach to meditation, it’s kids.  In addition to being used as a strategy for dealing with the stresses in their lives, meditation could possibly be the key to reshaping the whole educational system in our country.  I believe that the development of a focused meditation practice within the classroom could be just the thing we need to reshape school culture and create a climate of calm where students from every background would benefit.
My intention in writing for Progressive Buddhism is that maybe someone out there could use some of the insights I can offer into teaching/practicing meditation with kids.  In the short time I’ve been practicing, I’ve seen enormous benefits both in and out of the classroom.  Conceptually, it’s such a simple practice, but when done correctly and with regularity, I believe it to be enormously transformative.
15 MINUTES OF MEDITATION IS WORTH 15 MILIGRAMS OF ADDERALL
Many students have such short attention spans because we’ve developed a society conditioned to INSTANT GRATIFICATION.  This is particularly true when it comes to kids.  They can’t even sit still for longer than five minutes without seeing something explode or a really nice set of tits.  Forget about sitting alone to read a book cover to cover; that’s a joke.  (Unless, of course, there’s a book out there that’s ABOUT exploding tits, that is.)

Kids begin their day in America’s classrooms carrying more baggage than ever before:
·       Attention Deficit Disorder (ADD) and Attention Deficit Hyperactive Disorder (ADHD)
·       Absent father figure/positive male role model
·       Poverty (Especially in light of the current economic situation)
·       Emotional Disturbance (ED)
·       Physical abuse
·       English as a second language (ESL + ELL)
·       The Achievement Gap
This is by no means an exhaustive list, but a taste of the obstacles that many children need to overcome just to receive a decent education in one of our schools.  I didn’t even bother to mention the special needs that many students require in terms of additional educational services (SPED).
In addition, many of my students don’t eat healthy meals, they don’t have a clean place to do their homework, and they are exposed to sexuality WAY before they’re ready.  What’s worse is that even if they WERE able to transcend these setbacks, many of them aren’t even able to receive a good education because the school they’re attending DOESN’T OFFER ONE!
What about the kids that do “well” in school?  Those are the ones who are so stressed out and anxious about getting good grades that they’re crippled by the pressure.  Ever heard of Stuyvesant High School in Manhattan?