written by Buddhist_philosopher
Last year I started a series on "Heroes of Progressive Buddhism" as a way to help build a portfolio of sorts of Buddhists around the world doing great, progressive work.

The first in this series was Sebene Selassie, Executive Director of New York Insight. Selassie is a woman of color and as I noted last year, "What comes out in particular is Selassie’s commitment to Inclusion and Diversity outreach."

This time we have an example of inclusion and diversity outreach from Burma/Myanmar.

As Myanmar has seen a resurgence of Islamophobic, violent fundamentalist monks, it has also seen numerous leaders like Myawaddy seeking to build bridges and end violence. Now he and his work are under threat. From the article:

" ... renowned for his work with peace and interfaith groups,* the abbot has been accused of defamation by Myanmar’s politically powerful military following an interview he gave to the local Yangon Khit Thit news website in June. During the conversation, he questioned the propriety of a more than 30 million kyat (US$20,000) donation by an army commander to the ultra-nationalist Buddhist organization the Buddha-Dhamma Parahita Foundation."

“I will contest whatever lawsuit they use. Suing us shows there are no rights, but it will not stop me from speaking the truth,” said Myawaddy Sayadaw. “I will keep saying what should not be done and what should be avoided. I’m a Buddhist monk and this is my duty to show the right path for everyone.” 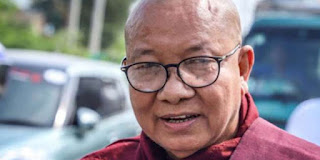 Standing up to repressive ideas (as the Buddha did with aspects of the caste system and entrenched gender inequality) and governments is central to a decidedly progressive Buddhism, as it follows the right understanding of our social and political context and puts it into right action. Not all Buddhists will do this, and that's okay.

For some, Buddhism will be primarily a path of devotion or merit accumulation, chanting, prostrating, reading texts, etc. But this active, engaged, progressive stance is every bit a part of Buddhism today as any other path.

This is the first  second in a planned series on the topic of “Progressive Buddhism.” That term is admittedly vague, despite a blog being devoted to the topic since 2007 and a facebook group since 2015 (both administered by yours truly at present). I hope in the coming months to develop a set of principles and ideals to guide thinking around and discussion of Progressive Buddhism, and to point out “heroes,” or people who embody some of those principles and ideals in their life and work. Sometimes these will be in depth, sometimes brief vignettes.
at 22:47 2 comments