Zen and the Art of Tube Feeding

written by Unknown
Overall my family and I have been pretty lucky with pets. My parents had two cats when I was growing up. The “baby” had a heart condition and I guess my mom had to give it medicine. That usually translated into my sister giving the cat the medicine, as she was destined to eventually work at a vet’s office.

When my husband and I had cats in the ’90’s through the early 2000’s, both passed after relatively short illnesses at 15 and 17 years of age. Until then, the most exciting veterinary experience we had with them was giving thyroid medication to our calico cat, Sheila. She also needed percutaneous fluids near the very end, but that was only a week or so and only once a day.

Nothing could have prepared us for…tube feeding a cat.

The cats we have now, Ichigo and Angel are total sweethearts. At least when Ichigo is not beating up his brother, they are sweethearts. They’re six years old. We were told at their last veterinary appointment in the summer that they were a little pudgy. So, we tried a few things changing their food around. We tried to exercise them more, but discovered that we really have no idea what is amusing to a cat. Most of our attempts resulted in us getting far more exercise than our fuzzy friends. So, when Ichigo looked like he’d lost a little weight, we weren’t that concerned. For some reason, Angel was spending a lot of time sitting next to him and we thought that was so cute!

Cats are small animals though. So when things start going downhill (we discovered), they go downhill fast. Next thing you know, Ichigo was lethargic and not engaging in any of his normal activities. We were getting  concerned, but it wasn’t until one of our friends commented on how terrible he looked that I called my sister. Rather than waiting until the next day, she advised us to take him to an emergency vet right away.

Those of you who have had infants will laugh at my adventure, I’m sure. Certainly, the idea of chasing down a cat, plunging 48 ml of “slurry” into it’s esophagus…one…milliliter…a…time…six…times…a…day seems like nothing to you. Cleaning the splattered slurry off of the walls after he’s shaken his head vigorously with the tube cap off? Piece of cake. Making the slurry…smelling the slurry…crushing medications and mixing into the slurry? Eh - that’s nothing.

In those moments at 2:30 am, after finally figuring out the sequestering the cat in the bathroom for tube feeding is best for everyone involved, there is time to ponder.

I started thinking about mortality and expectations. Pena Chodron once said (quoting someone I believe) “since death is certain and the time of death is uncertain, what is the most important thing?” This is a phrase I consider frequently when I’m faced with difficult situations. In this flurry of activity taking care of the cat, however, I was reminded that I actually do take each day for granted. That “the time of death is uncertain” has translated to my subconscious as “some time in the very distant future that I don’t have to worry about now.” I expect everything to keep clicking along just fine.

I’ve been fortunate in life. I’ve mentioned elsewhere that I had the opportunity to have relationships with three of my great grandparents and that three of my grandparents lived well into their 80’s and 90’s. My father recovered completely from his cardiac arrest - which rarely happens in real life. My parents’s cats lived to be well over 10 years old - even the one with the heart condition. Our last cats lived into their teens. In my good fortune, I lost perspective on the precariousness with which we greet each day. It simply never occurred to me that Ichigo could die, but he almost did.

I’m trying to hold this thought in my head for a while, think about and manipulate it a little, let it sink in. The tube came out last week and my husband, daughter and I are currently obsessed with his gustatory rhythms. It would be easy to forget now and just go on as I did before. At some point, this lesson too will fade. For now though, I bring my palms together and bow to it’s wisdom. Katz! 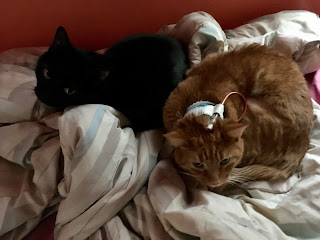