Lisa runs spiritual group tours to India which her two Tibetan friends Lama Buga & Lama Kalden co-host with her.  Taking people to attend teachings by the Dalai Lama & learn meditation, she does this work to open hearts and expand minds way beyond norm!  And who better to help do that than the Dalai Lama himself? www.spiritualbackpackersindia.com

Kalachakra 2012 – How The Dalai Lama Raised The Spiritual Roof In India!

Ever dreamed of experiencing the power of Tibetan Buddhism at its peak?  Or thought of fully letting go of all physical comforts and attachments in search of the ultimate comfort, that of the mind and heart?

Upon hearing about the Kalachakra initiation happening in Bodhgaya India, the place where Buddha achieved enlightenment whilst sitting under the Bodhi tree, I just knew I had to be there.   However I will put my hands up straight away and say I didn’t fully understand what it would entail.  What I did know was that Tibetans travel from far and wide, including from Chinese occupied Tibet to get to this special 10-day tantric initiation.  All sects of Tibetan Buddhism are represented, so it really is one big ol’ Tibetan party and one that the Dalai Lama does not do on a regular basis.   In 2011 there was one held in Washington D.C but previous to that it was as far back as 2006 since the last one held at Amarvati in India.

As I began to share with people both Tibetans and Westerners that I really wanted to go the overall response was don’t do it! It will be filthy dirty, totally chaotic and you will most definitely fall ill.  The reasons for their concerns were Bodhgaya is situated in Bihar one of the poorest states in India and is filled with beggars, sickness and a understandable culture of get what you can from whoever you can.  Add 300,000 Kalachakra pilgrims to that and the picture definitely starts to look somewhat daunting.

When I actually arrived in India I had no hotel or transport booked for the Kalachakra which others had done up to a year previous.  Hotel prices were through the roof at an escalated price that was fifteen times the norm!  However somehow a room manifested at a fraction of the cost others were paying at the last minute in a Burmese monastery affording me a peaceful escape from the Kalachakra crowds.  Having been there a good two weeks before the event itself I got to witness the build up to it including the assembly of the breathtaking chair for His Holiness and the raising of colourful thankas all around it.  In general Tibetans wait till the last minute to arrive because of the inflated costs but when they did finally arrive they did so by the busload and that in itself was a sight to see.  Armed with pots, pans and bedding of all sorts it was not unusual to hear of up to 12 of them sleeping in one double sized room.  Friends of mine from Gyumed monastery were sleeping in a hall with no less than 500 monks with barely enough room to turn over. 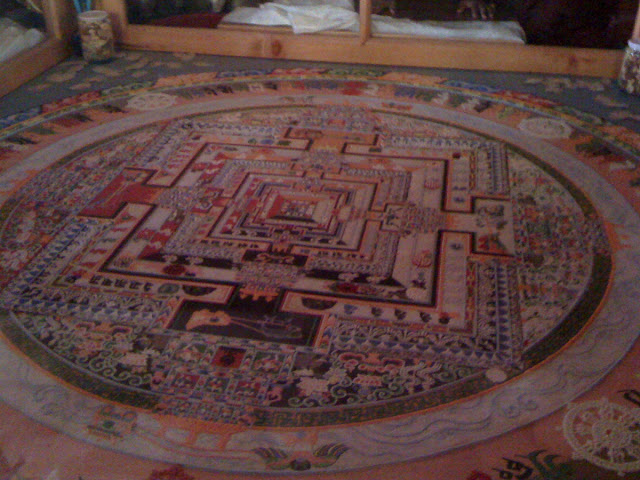 So what is it that drives the Tibetans to take on such physical challenges without a second thought?  The Kalachakra initiation was given over 10 days and is considered to be the one of the most auspicious initiations within the world of Tibetan Buddhism.  There was eight days of preparation rituals during which the Dalai Lama and his monks made the incredible Kalachkra sand mandala.  In the morning time we could go into the grounds and listen to their chants and watch them prepare.  Sitting there in the energy of the proceedings was a blessing in itself as meditations ran so so deep.  In the afternoon the place would fill to bursting and beyond with steadfast devotees from around the globe eager to listen to teachings by His Holiness.  Outside the same numbers of people were blocking the streets as they watched the event on the big screens.  It was an all time record for the number of devotees attending a Kalachakra.  After the teachings and preparations were done, the initiation itself happened over the final two days.

I feel it is important to mention that at the end of the day we fell into our rock hard beds exhausted, crashing out immediately.  Yet the Dalai Lama was getting up at three in the morning most mornings to prepare, followed by giving teachings and all the while holding us in his big heart.  The energy of this wonderful 76-year-old monk as he calls himself, is indeed endless.  On the night of the first day of initiations something really special occurred which I will never forget.  I was sitting meditating under the Bodhi tree in the Mahabodhi temple as around the perimeter devotees walked uttering their mantras and prayers.  It was totally packed with people shuffling and prostrating their way around.  In the distance I heard singing and I couldn’t figure out where it was coming from.  Then sure enough as the crowd continued to circle around the ancient melody got louder and louder.  A throng of Tibetan monks were signing their hearts out and as they flowed past it did not falter.  It was as if the song had spread around the perimeter like a flame to petrol.  In that moment I felt like I had the chance to witness the true beauty of Tibetan Buddhism.  The Dalai Lama had worked so hard for eight solid days, had given us the initiation and we were as high as spiritual kites.  It was totally electric and my initial thought was the Chinese government will never ever dampen this spirit and I hoped so much that the 200 Chinese spies reported to be at this event were witnessing that moment.

The Dalai Lama then finished by giving us the White Tara initiation for long life.  When he was leaving Bodhgaya people were understandably running after his car crying and I was grateful I didn’t have to witness him going for I know I would have been right there with them.  The sand mandala remained for 3 days to allow us to go and have a closer look.  According to a book distributed at the Kalachakra in Washington D.C, just by looking at the mandala you remove all negative karma from countless eons previously.  A wonderful sight it was, the feeling from it was one of inner beauty.   The ceremony then ended by monks releasing the positive energy of the mandala into the everyday world by a final ritual.  The Kalachakra is for world peace and I have no doubts whatsoever it has the deepest of impacts.

As Bodhgaya is quite a small town many people had to camp and tents were rented out ranging from $3 to $100 per night.  However it rained severely on the first day which is apparently normal for when high Lamas arrive and start cleansing the place.  But that meant conditions on the campsites were pretty awful and only went downhill from there due to poor organisation and sanitation.  Towards the end of the initiation the Dalai Lama asked why should people pay to stay in those awful tents when we have received so much in donations? So he requested that all tent dwellers get a refund and so they did.  Then he left not taking one remaining Rupee of donation with him; instead he gave it to the local schools and hospitals of Bodhgaya.  This man has the power to change the world…so why won’t we let him?

If you're interested in finding out more or contacting Lisa,
Click here to watch our video clip to learn more, or visit www.spiritualbackpackersindia.com
at 01:24 4 comments